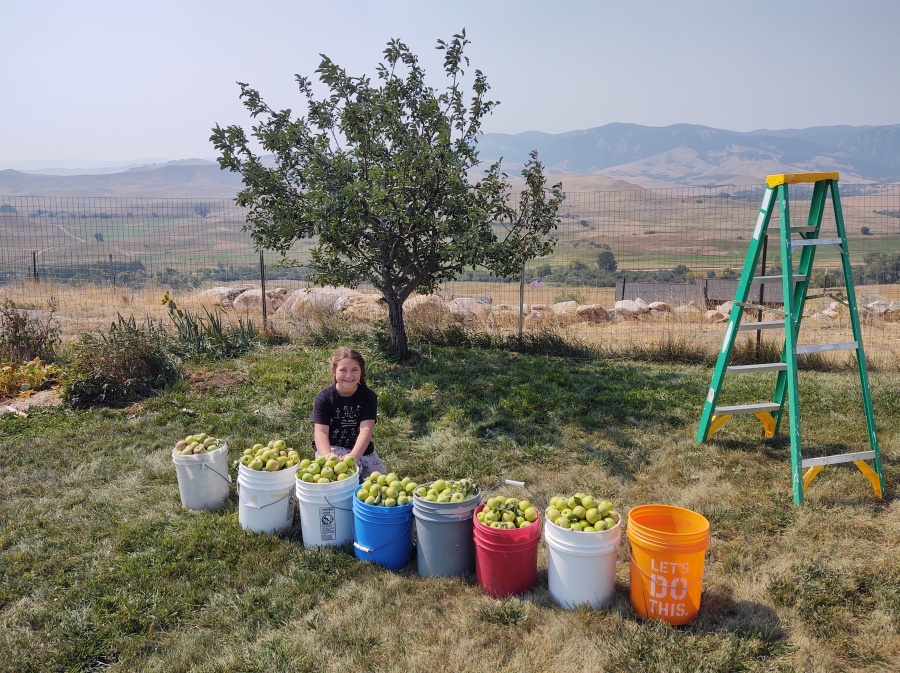 Hardiness Zones tell you ‘diddly squat’ if you live where I live.

It misses the fact that Hazelnut trees (zone 4) will grow here but not produce fruit. It isn’t the cold but the too short a growing season that prevents it. The Wyoming University did an experiment on goji berries and had the same result. It’s an old story and the reason why experimentation is the only way to tell for sure if probability is an actuality.

Wouldn’t it be nice if the agricultural extension agency in your area put out a list of ‘tried and trues’, but wait, tried and true for whom? The guy who lives down by the creek with all the trees, the one up on the windy bare hill, or the one sidled next to the mountain. Nope, none of our gardener habitats are created equal.

Could be why I’ve experimented with 15 kinds of dried beans, a new one this summer. Why I tried a new tomato variety a…gain. I can’t rely on the local commercial greenhouse to have the selection I want or need for my microclimate. With a prayer, we rush planting around Memorial Day hoping Jack Frost will sleep for a spell and a killing frost can hit anywhere between August 21 to the very beginning of September, a reminder once more just how short our growing season can be. We need greenhouses and varieties that can ‘get er done’ in a short order while handling volatile weather.

So what is our microclimate? We live 3/4ths of the way up a steep hill on a small, fairly level area before it inclines once more. That means the houses down by the creek with the trees get frost in the fall first as trees hold the cold and it stays normally stays cooler there anyway. Heat rises up to us allowing us to grow what they can not. But shot air as it rises cools so there is a point in which living on a hillside is not an advantage gardening wise. We have plenty of wind and gust that ‘come out of nowhere’ sending anything not latched down sailing.

Our property is south facing and if I tilt the beds a little, they do even better. Fall frosts nowhere like this one did at the beginning of the month sent us scurrying to pick anything remotely ripe and green tomatoes of any size. Even the apples off one of the trees weren’t ripe but good enough to make pie filling. Maybe if I’d thinned it, it would have ripened faster. 23 F. nights is a killing frost and the wood stove ran in the chilly 40 degree days. Then back to 90’s and 80’s, an extra hot summer for us. But we are now getting reprieves in the 60’s and 70’s, promising Fall is around the corner.

I don’t mind that we had to pick the garden since this summer’s severe drought has left our plants precariously thirsty. It will hopefully give us time to set things in a better order for next year. We learned some lessons through it all. A garden should be planted with hard years in mind.

After six years of gardening in this location, I’m building favorites, crops that do best in adverse conditions. We’ve had a year where the heavens opened and water poured nearly washing out our road and sweeping bridges below us down stream. We’ve had this summer of extreme drought with tons of dry wind, and a well that we thought was running dry putting the plants on severe water rations. We’ve had summers everywhere in between all in the span of 6 years. Kirk just fixed a huge leak and we just found another one. My dad drilled into me, “A job worth doing is worth doing right.”, but obviously the previous owner didn’t believe in that as he was the builder and a retired house construction worker. The mistakes have cost us a fortune in time and money. Lessons have definitely been learned. One is our garden needs to be carefully planned for every contingency.

Through it all, we’ve settled on some ‘ole’ reliables’ as a basis.

So what all are we looking at in our micro climates?

2. Timing of the amount of rainfall. The U.S. averages 38 inches but we get a measly 8 to 22. Some of the lowest in the nation.

8. Soil structure such as loam, sand, and clay.

10. Available water. A big deal as we have a good well at 150 feet when the lines aren’t leaking. Just across the gulley, they are seeking water at 600 to 800 feet. They have no trees or gardens while around us are springs that bubble the precious fluid up out of the ground. We have one below affectionately called, Bear Creek Geyser. It makes us laugh with its pathetic burps of water. Yet 20 miles to the northwest, I had a gentleman tell me his well is at 1000 feet.

We live hear the mountain and so the sun goes to bed early, slipping behind the hills and cooling the temperatures quickly. Having reached greater lows, it takes more time to heat up in the morning. This means, gratefully for us, the intense heat does not typically hit us but for a few hours. I’m speaking personally of course, not plant wise.

Remember that boy with the light switch. We have frost up to Memorial Day and sometimes beyond. Then as early as  August 21st or as late as the end of September. It’s Wyoming and diversity is what it thrives on.

If you are as frustrated with the Hardiness Zone charts as I am, I’d suggest you look at the 1 through 10 list I’ve made and come up with your own code within it and add more if needed. Remember those pages we did as a child, ‘one is not like the other’ that is how I feel about every garden plot.

Welcome!! Join me and find out what happens each week as I muddle between research and the reality of acquiring a measure of skill on the subject. It’s all about self-sufficiency and homesteading. So peek in as I coax frothy rich milk into the bucket, gather eggs, knead bread, and beg vegetables to grow.